Do you like time traveling? (I hope you said yes!) Because I think its super cool. Would you like to join me in my time machine as we travel back in time? I think the year 1959 would be a good place to start. And here we go….

My time machine is called Super Quick Upcycled Interdimensional Doohicky, but you can call her Squid for short. First, we will travel to Saint Louis, Missouri. Melissa McGragauh (my mom) was born March 1, 1959, to parents Judith and Roy (although everyone calls him Cookie) McGraugh. You see, Melissa was born in an Irish-German Catholic family that owned a bakery in STL. Her family enjoyed spending time together, baking, and cooking! Now, if we travel forward in time just a few months and few days to October 6, 1959, we will find in Blue Hill, Nebraska, a town of 730 people, James Barnason (my dad) was born. James was born to Marguerite and Duane Barnason. The couple owned a grocery store a few blocks from their house, several horses, pigs, and chickens as well as a few hundred acres of corn fields. Melissa the first of three children, and Jim the last of four children could not have had more different childhoods. Melissa, a city girl, and Jim a farm boy. Jim grew up to be a butcher in the family grocery store in high school, and then a computer science engineer for a software company, while Melissa studied Art History and became a stay-at-home Mom and part-time secretary. 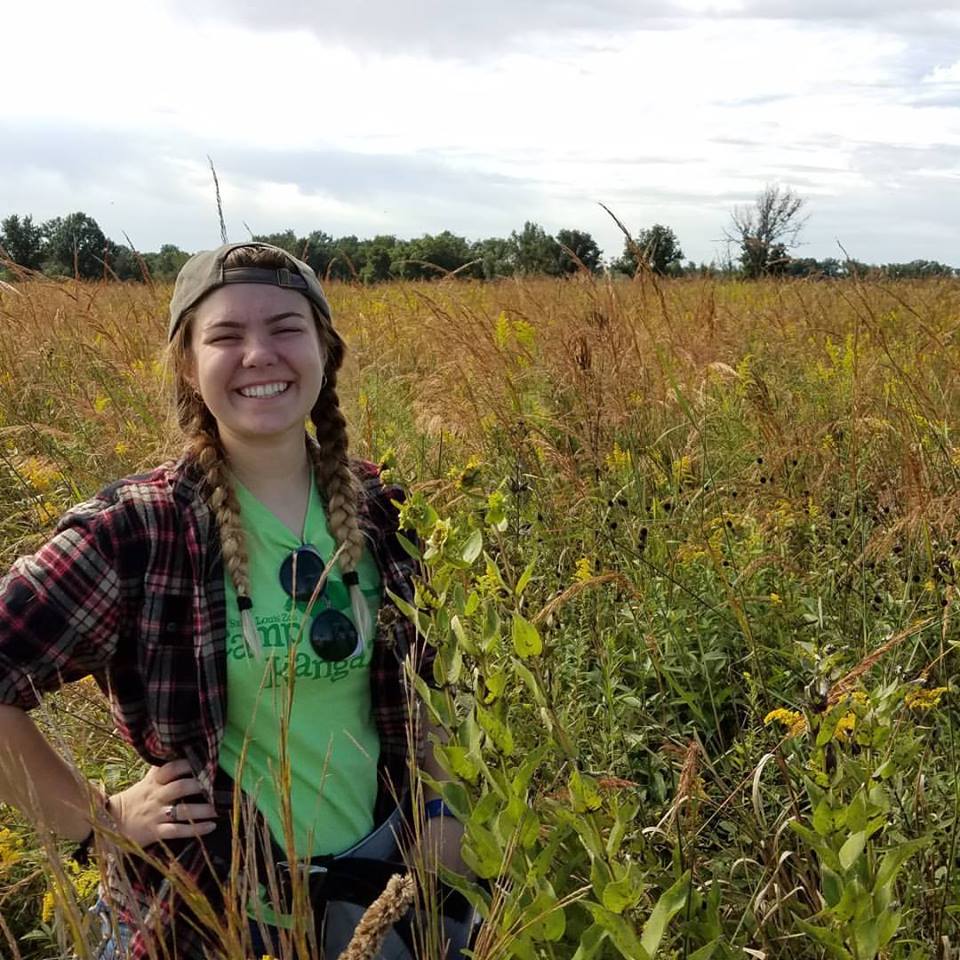 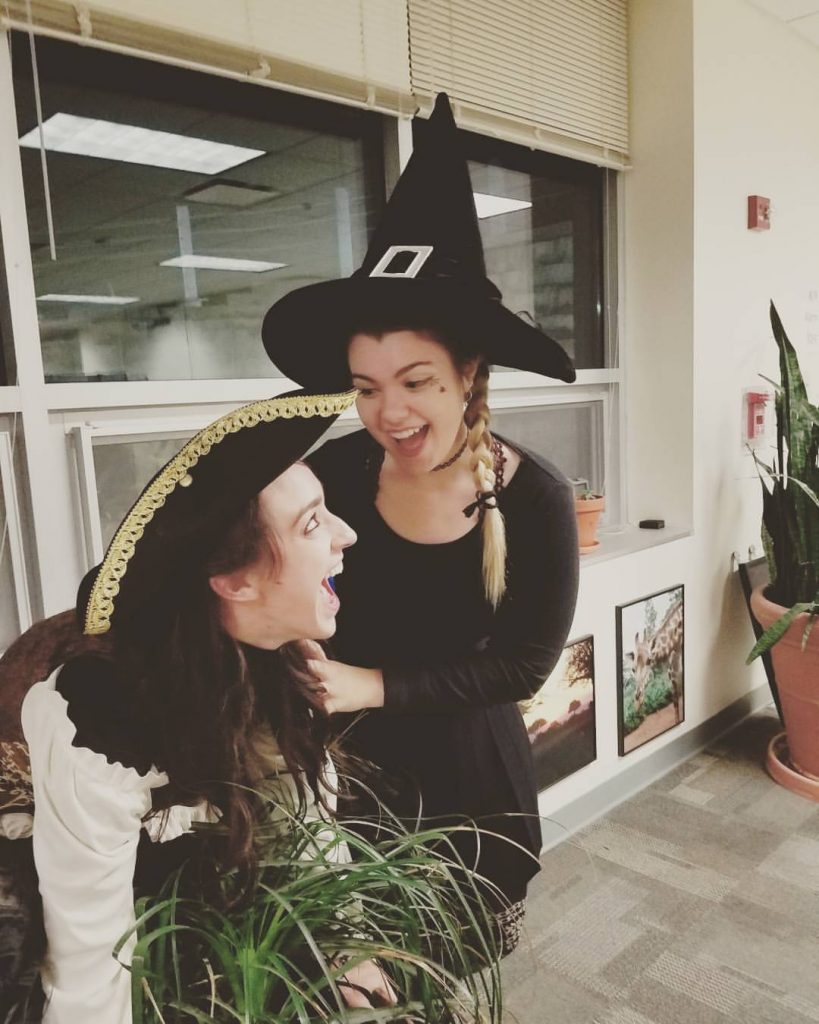 Lets travel forward 31 years into the future, where Melissa, on a whim, goes on a blind date with a man named Jim. Somehow, fate brought these two together, four years later in 1994 they got married, and one year later in 1995, yours truly was born! You with me so far? Good, we are now going to move a little slower through time and move through less space as we watch Sydney Barnason (me) grow up. Sydney was an only child. But, as we remember Melissa was part of a LARGE Irish-German family and so Sydney grew up with cousins who were like siblings. She often fought with her cousin, Mary Kate over Barbie dolls, and her cousin, Alexander over who was right or wrong. Her mom’s side of the family shaped her greatly as aunts and uncles and cousins were not just your typical extended family, but more like extra parents and siblings.

Let’s travel to the year 2002, in Manchester, MO, a suburb outside of Saint Louis. Sydney had settled in on a beautiful fall day at the ripe young age of six years old to… watch a SpongeBob SquarePants marathon! Yes! You read that correctly! On a crisp fall day where the leaves were changing colors and the wind was blowing slowly and the air smelled of apple cider, happiness, and pumpkins, she had decided to watch tv! Jim told six-year-old Sydney that if she decided to watch TV, she probably wasn’t mature enough to go leprechaun hunting! Well, six-year-old me was not a fan of being told she couldn’t do something. So, Jim and Sydney geared up and ventured out to a local park with their dog, Herb, a big black lab. For years, Sydney and Jim searched for leprechauns. All the while, Jim explained to Sydney about “The Leprechaun Laws of Physics” that when you catch a leprechaun, they have a parallel life to yours. That to capture a leprechaun you have to find three of their five most magical belongings: a shoe buckle, a hat, a fairy stone (something that holds their magic), a piece of clothing, and/or a gold lucky coin. 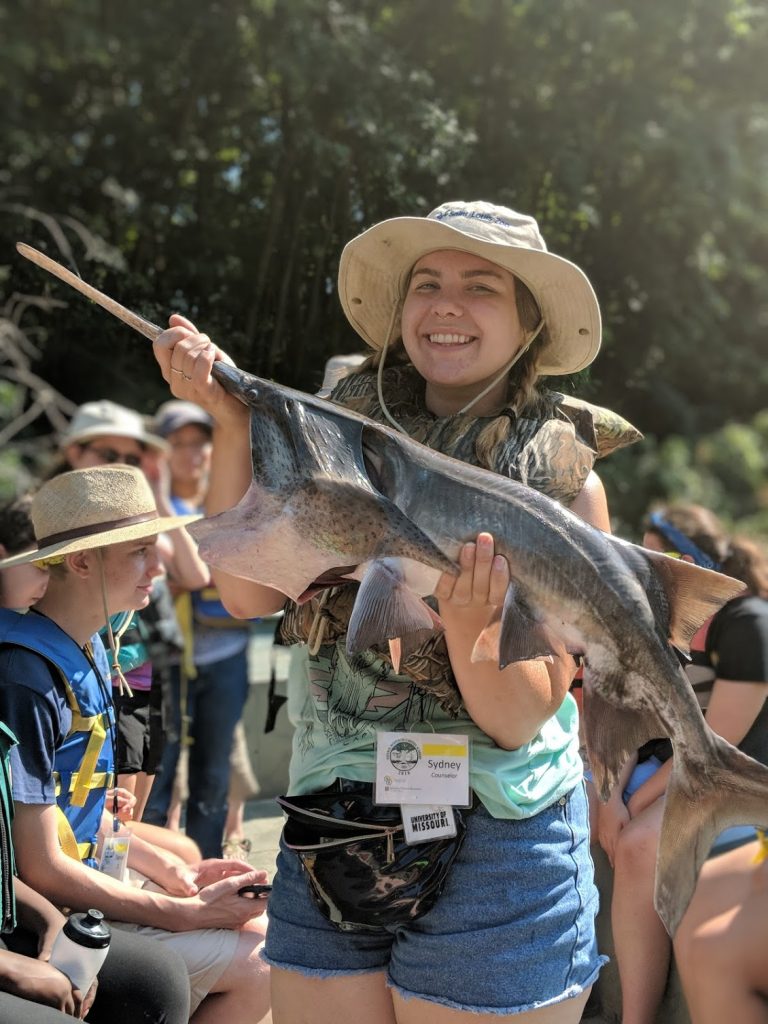 One day, while strolling through the forest, Sydney was lucky enough to stumble upon a hat, a shoe buckle, and a piece of cloth. Sydney had caught my leprechaun! Her name is Lucy. She is now 3 feet tall and has a very similar life to her capture’s, Sydney (Although capturing a leprechaun is not making them live in a cage, it just means that they now share a connection to a human). Her dad, Lucky, was Jim’s leprechaun. Lucy and Sydney wrote letters to each other and would mail them through a rickety old mailbox in the middle of the woods. Lucy’s were always written in green ink because she was a leprechaun (duh).

Fast forwarding 4 years to July 22, 2006, the S.Q.U.I.D. sometimes doesn’t like to come to this date… let’s see if she does today. Ah, wonderful! She has taken us here. I guess she has deemed it important for you to know! S.Q.U.I.D. labels this the worst day of Sydney’s life. Jim, while doing his beloved activity of bike riding suddenly died from a heart condition. Although at the time, Sydney thought she would never find joy quite like that of a Father-daughter leprechaun hunt, she did.

Since 2002, Sydney had been attending a summer camp at the Saint Louis Zoo called Camp Kangazoo. Although, at the time it was just something she looked forward to every summer as a week of fun and silly shenanigans. Her favorite part was watching the counselors dress up and act silly. So, in the following summer of 2007, as the S.Q.U.I.D. takes us there to the center of Forest Park where the Saint Louis Zoo lives, Sydney found herself in a group called the CKSS. CKSS stands for Conservation Kids and Special Species. Each year, she would be in a different group with different counselors. She would start the day off with zootastic songs, play games about predator prey relationships, make crafts about habitats, and at the end of the week perform skits for the rest of camp. Each summer Sydney looked forward to Camp Kangazoo. Camp Kangazoo was her next love and joy in life!

The S.Q.U.I.D. will now take us to the summer of 2010. Sydney’s last summer as a camper. She was excited to be in the oldest group and do the most zootacular activities, but was sad that she would be leaving the zoo, UNTIL… A teen volunteer with the group told her she could apply to work next year. She would be able to work at camp as well as many other zoopendous activities that teach people about the environment and how they can help save the earth!

Whew, ok now that S.Q.U.I.D. has taken us on a plethora of happy and sad journeys, I would like to finally introduce myself. My name is Sydney! I am over the moon excited to be joining Camp Augusta this year! If you haven’t picked up, Squid is my nickname that my family gave to me a long time ago when I sang a children’s song about squids non-stop. You can call me Sydney or Squid whatever is most fun and comfortable for you!

This summer I am most excited to get to know all my campers, make new friends among the staff and spend time in a new environment with new trees, plants, and wildlife! I am most excited to tell campers jokes and riddles and hear what jokes and riddles you have! My favorite animals are all birds, giraffes, and one special Polar Bear named Kali at the Saint Louis Zoo. Do you know where Kali the Polar Bear keeps his money??? THE SNOW BANK! (hahaha I love jokes!) I also really like trees! I have three pets: a snake and two cats. I hope to get more animals once I settle down in one place. Maybe a few dogs, some birds, and more reptiles. I want to tend to a massive garden to grow my own food! Who is to say?

In my free time, I enjoy swimming, cross-stitching, re-reading Harry Potter and spending time with friends. As you have seen, I spend 9 years at Camp Kangazoo as well as other summer camps across the Saint Louis area. And I just finished my eighth year at camp as a counselor (volunteer and staff). Welp… I think that sums me up well. Sorry to take up so much of your time! Thanks for reading and have a zootastic and camptastic day! 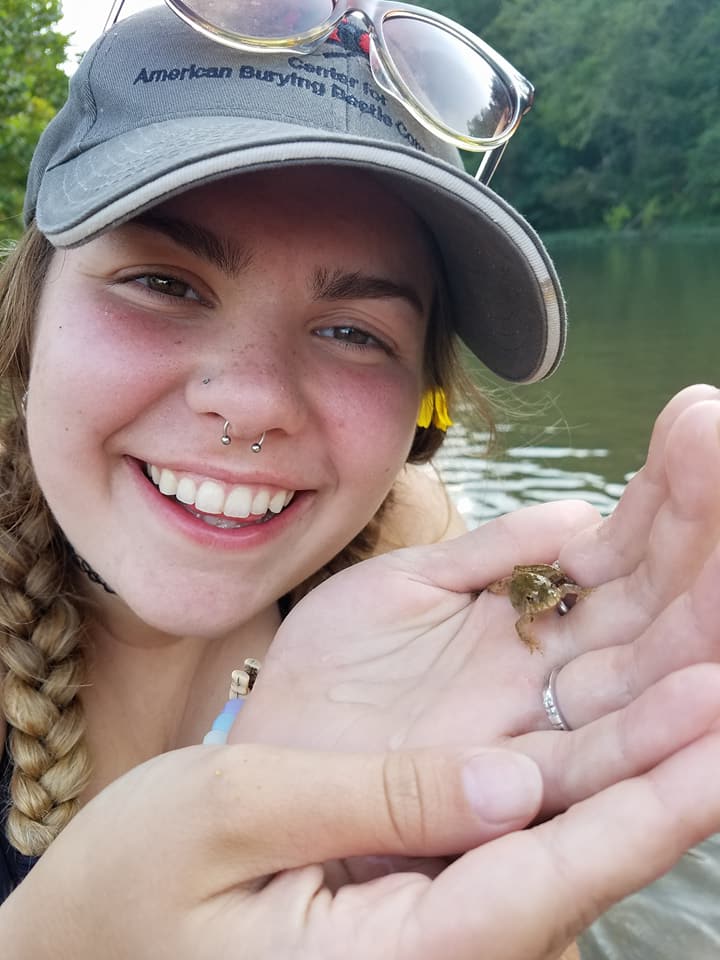 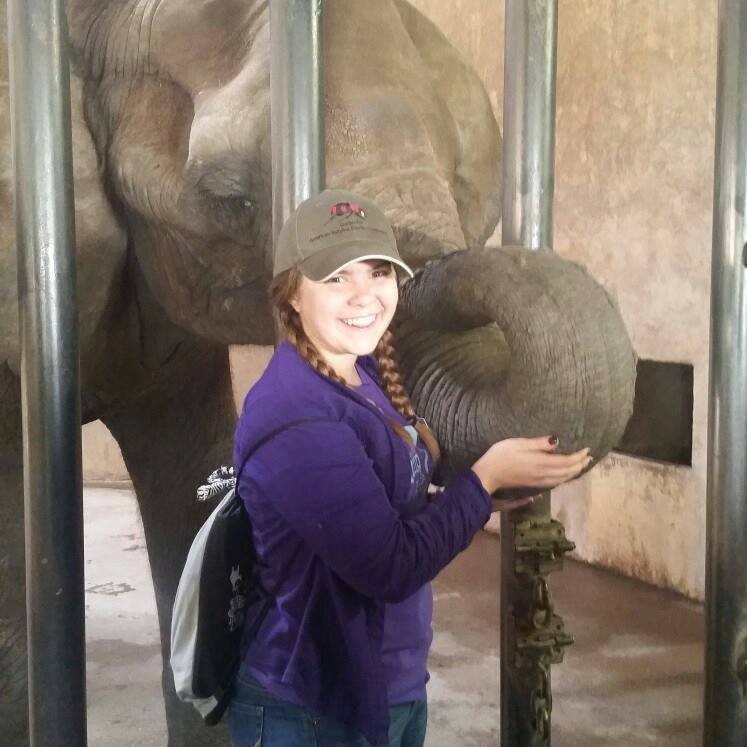 Ready to hop back into the S.Q.U.I.D.? I know we have done a lot of time traveling and I am sure you are tired, but we are nearly finished! Lets Gooooooooooo. As S.Q.U.I.D. takes us to the year 2014, where Sydney graduates from high school, but more importantly leaves behind the teen volunteer program that shaped her into who she is today. While her mentors read to all the teens the story of the Lorax, Sydney and her friends shed silent tears as they were grateful to have spent hundreds of hours (In Sydney’s case 1,224 hours) volunteering at the zoo, making friends, traveling around the world, and constantly learning. But those tears were also sad tears as they didn’t want to leave their friends, mentors, and memories behind. Well… they didn’t

S.Q.U.I.D. takes us forward another year, 2015, after Sydney’s first year of college, she received a job (A paying job!) to work at camp! But it wasn’t just Sydney, she would be working alongside her 6 best friends, together they made up the Zootastic Seven. The Zootastic seven has taken on journeys together through the years of traveling through Costa Rica, hiked the rainforests of Belize and dove deep to the depths through the coral reefs, put themselves through a rigorous boot camp, and lived thousands of miles apart.

S.Q.U.I.D. will take us on one last journey to the year 2018. Sydney finishes her last summer at Camp Kangazoo. She has graduated from college with a degree in Fish and Wildlife Sciences and a minor is Spanish and is starting Grad School (aka college again but harder) with an M.S. in Human Dimensions of Natural Resources and an M.A. in Youth Development. Sydney is again sad to leave, but happy she has all these wonderful memories. As Sydney searched far and wide, climbing mountains and swimming across the oceans of the internet, she stumbled upon a job listing for Camp Augusta… and the rest is history!

Sydney (bottom left) after a rigorous day at boot camp with friends
Sydney in her element
(It was a controlled fire! You can ask me all about it when you come to camp!)
Sydney dressed as a tree and her friend as the sun
Sydney backpacks through Missouri with a friend (right)
Sydney with crazy green hair
Sydney as a bird (right) and friends dressed as a pineapple
Sydney Graduates college
Sydney and friend dressed for work
Sydney on a winter hike
Sydney and a tree frog in Belize
Sydney works with wild Hawks
Sydney as a giraffe 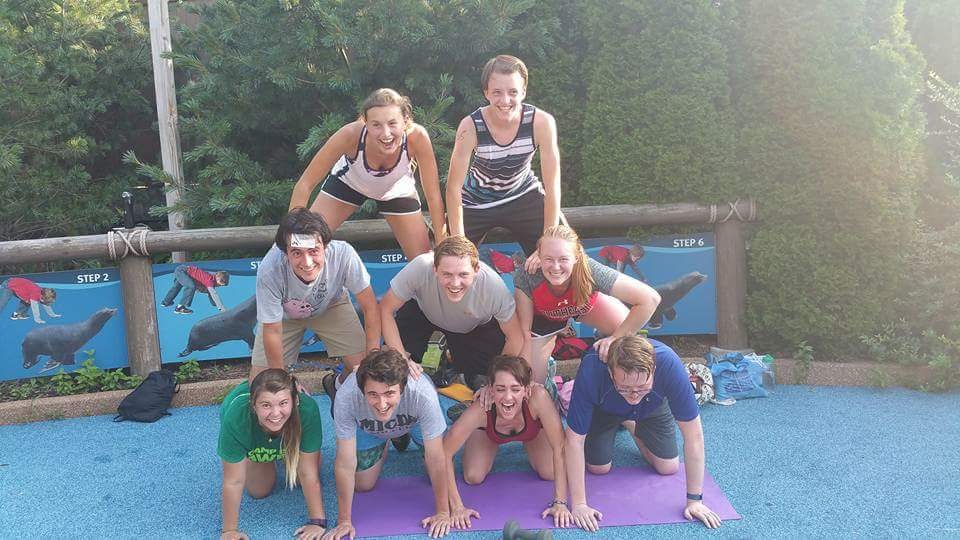