Resources on Creativity and Expression

We hope you’ve seen that there is intentionality [and evolution!] in our philosophies. Here are just a few resources we have found informative of our aims around creativity and expression:
(You can revisit the landing page here.)

Creativity in the Workplace… 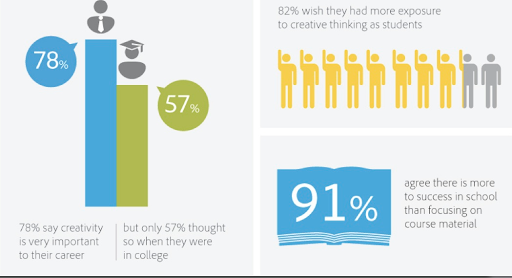 More: Compendium of creativity, collaboration, and innovation stats and research

“The desire to create is one of the deepest yearnings of the human soul.”
― Dieter F. Uchtdorf

“Everything you can imagine is real.”
― Pablo Picasso

“You can’t use up creativity. The more you use the more you have.”
― Maya Angelou

“To practice any art, no matter how well or badly, is a way to make your soul grow. So do it.”
― Kurt Vonnegut

“Creativity involves breaking out of expected patterns in order to look at things in a different way.”
― Edward de Bono

“Who were you before the world told you what you were not?”
― Bryant McGill, Simple Reminders: Inspiration for Living Your Best Life

“No man has the right to dictate what other men should perceive, create or produce, but all should be encouraged to reveal themselves, their perceptions and emotions, and to build confidence in the creative spirit.”
― Ansel Adams

“I don’t believe in fashion. I believe in costume. Life is too short to be same person every day.”
― Stephanie Perkins, Lola and the Boy Next Door

“I want freedom for the full expression of my personality.”
― Mahatma Gandhi, The Essential Gandhi: An Anthology of His Writings on His Life, Work, and Ideas

“Human resources are like natural resources; they’re often buried deep. You have to go looking for them, they’re not just lying around on the surface. You have to create the circumstances where they show themselves.”
― Ken Robinson

“The Element is about discovering your self, and you can’t do this if you’re trapped in a compulsion to conform. You can’t be yourself in a swarm.”
― Ken Robinson, The Element: How Finding Your Passion Changes Everything

“If you celebrate your differentness, the world will, too. It believes exactly what you tell it—through the words you use to describe yourself, the actions you take to care for yourself, and the choices you make to express yourself.”
― Victoria Moran, Lit From Within: Tending Your Soul For Lifelong Beauty

Feist, G. J. (1998). A Meta-Analysis of Personality in Scientific and Artistic Creativity. Personality and Social Psychology Review, 2(4), 290–309. https://doi.org/10.1207/s15327957pspr0204_5
This meta-analysis looked at tests results of the Big 5 and compared distinguishing personality factors among scientific and artistic vocations. In general, creative people are more open to new experiences, less conventional and less conscientious, more self-confident, self-accepting, driven, ambitious, dominant, hostile, and impulsive. Out of these, the largest effect sizes were on openness, conscientiousness, self-acceptance, hostility, and impulsivity.

Rose, Laura Hall, Lin, Hsin-tai. (1984) A Meta‐Analysis of Long‐Term Creativity Training Programs. Journal of Creative Behavior, 18 (1), 11-22. https://doi.org/10.1002/j.2162-6057.1984.tb00985.x
In a metastudy of creativity-focused instructional practices, it is shown significantly that training, practice, and encouragement in using creative thinking skills can increase the degree of creativity manifested by individuals.

Hsen-Hsing Ma (2009) The Effect Size of Variables Associated With Creativity: A Meta-Analysis, Creativity Research Journal, 21:1, 30-42, DOI: 10.1080/10400410802633400
Related to affecting creativity, this paper explored the effects of different variables on different measures of creativity across a variety of studies. It notably showed that
(a) the mean effect sizes associated with problem-solving creativity and verbal creativity were significantly larger than those associated with emotional creativity and nonverbal creativity,
(b) variables having a large mean effect size were prestige of honors/awards, working circumstances favorable for creativity, defining problem, and retrieving knowledge

Kim, KH (2011) The Creativity Crisis: The Decrease in Creative Thinking Scores on the Torrance Tests of Creative Thinking, Creativity Research Journal, 23:4, 285-295, DOI: 10.1080/10400419.2011.627805 – According to 6 Torrence Tests over 6 different year spans, creative thinking scores remained static or decreased starting at 6th grades, and since 1990 creativity scores have significantly decreased (even amidst rising IQ scores)

Sio, U.N., Monaghan, P. & Ormerod, T. Sleep on it, but only if it is difficult: Effects of sleep on problem solving. Mem Cogn 41, 159–166 (2013). https://doi.org/10.3758/s13421-012-0256-7
Tasked with various-difficulty problems, scientists studied the outcome of the problem solving after no time, awake time, and sleeping time. “The sleep group solved a greater number of difficult problems than did the other groups, but no difference was found for easy problems. [They] concluded that sleep facilitates problem solving, most likely via spreading activation, but this has its primary effect for harder problems.”